In good hands? Germany after the general elections

In good hands? Germany after the general elections

Following the federal elections in Germany on 22 September 2013, coalition talks are slowly getting underway. For democracy activists, Friday 27 of September was a day to call for the introduction of the referendum at national level with a special action in front of the chancellor’s office, the “Bundeskanzleramt”. Our spokesperson Cora Pfafferott reports on her visit to Berlin, where she witnessed the political action and participated in Democracy International’s campaign seminar towards a more democratic EU.

The first thing that catches my eye as I get off the train at Berlin’s central station is a huge poster showing Angela Merkel’s most common gesture known as the “Merkelraute”: a triangle formed by pressing the fingers of both hands firmly together. The slogan on the poster just around the corner says: “Germany’s future is in good hands”. 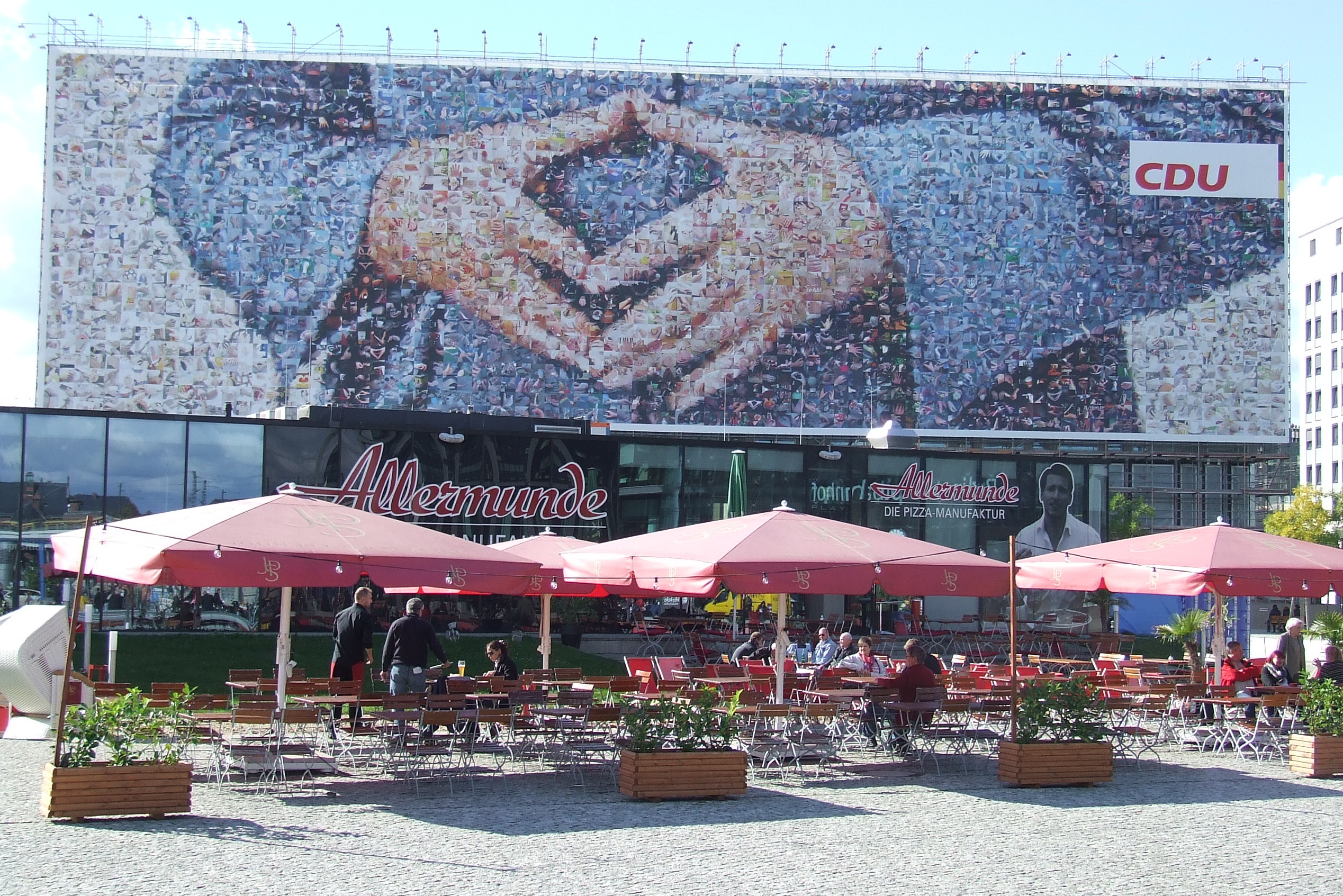 However, the marchers participating in the Upright Walk would not say so when it comes to the state of (direct) democracy in Germany. Article 20 of the German constitution, the Grundgesetz, clearly stipulates: "The Federal Republic of Germany is a democratic and social federal state. All state authority is derived from the people. It shall be exercised by the people through elections and other votes..." However, direct votes at national level do not exist. In particular, Angela Merkel’s party, the Christian Democrats (CDU), have consistently blocked the introduction of a referendum at national level for more than 60 years.

This is the reason why democracy groups in Germany continue to fight for the introduction of a referendum at national level: During this year’s election, the organisation Mehr Demokratie ran the campaign entitled “Volksentscheid – bundesweit!”. Michael von der Lohe, Director of the Omnibus, initiated “The Upright Walk”. The march, in German “Der Aufrechte Gang”, is based on a historic event: 182 years ago, a group of 600 Swiss farmers had walked to the city of St. Gallen to demand direct democracy and sovereignty of the people for the people. Their plea was successful.

Is Mrs Merkel watching the activists as they gather in front of her seat of power? Germans often refer to the post-modernist building that houses her as the “Bundeswaschmaschine”, the federal washing machine, due to its round windows and its cubic form. We should hope she listens also while Michael von der Lohe holds his speech, just a few minutes after his arrival. 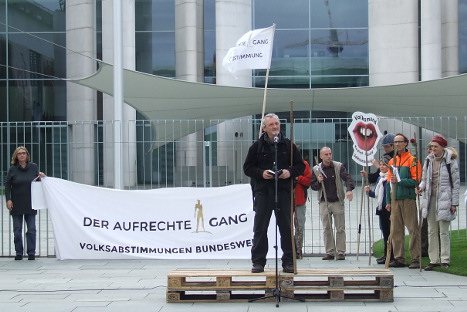 Michael von der Lohe cites Article 20 of Germany’s constitution. He talks about his march, about the people he met along the way and the conversations he has had. He is pretty emotional. I can understand him. He has walked 675 kilometres, from the city of Bochum in the west of Germany to Berlin. He has spent 41 days on the road. After such an effort, arriving at the Bundeskanzleramt must feel like winning the “Tour de France” after the final stage on the Champs Elysée. He tells Mrs Merkel and the new government yet to be formed, that people will keep standing up for direct democracy. The big issues of our time such as climate change could only be solved together.

After the action, it is time for me to move on to Berlin-Kreuzberg, where Democracy International’s seminar to plan our campaign for a more democratic EU is due to begin that evening.

Re-birth of Europe with a democratic EU convention

A bull made of wood welcomes us, about 15 young people, in the co-working space in Kreuzberg. I am reminded of the ancient myth which says that Zeus brought Europa to Crete in the guise of a bull. Doing so, he gave birth to “Europe”, both as a continent and as a cultural concept. The idea of a democratic EU convention Democracy International wants to campaign for is pretty much the same: Europe is to be recast from the ground up through a long-term assembly composed of citizens, academics, entrepreneurs, politicians and representatives of civil society that will convene to work out a new draft treaty. 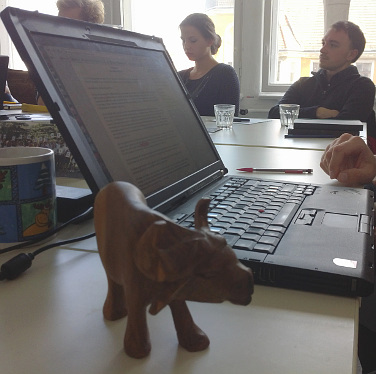 Our core demands are that the members of the EU convention are elected democratically and that the convention is accorded with an adequate time frame for serious and thorough deliberation, including proposals from civil society. The draft proposal that the EU convention will elaborate is to be ratified by referenda in all EU member states. You can sign our call for a more democratic EU here.

All Saturday we discuss questions around how to realise our idea of an EU convention and how to design the campaign. We are active and we are pretty creative, the planning will continue in Brussels from 11 to 14 October 2013.

On Sunday, I finally make my way across Berlin to get on the train back home to Cologne. Along the way, I pass loads of people participating in the Berlin marathon. I admire them for their stamina and the discipline it takes  to run 42 kilometres in just a couple of hours. Looking at these people, I think of Michael von der Lohe: for him, the “Upright Walk” was also a marathon.

And then it dawns on me: We people are active, we have goals. We want to achieve something. Being “in good hands” is not enough. We will not go away anymore, as Michael von der Lohe had said in his speech.