ABSTIMMUNG21 - One step closer to a nationwide referendum

ABSTIMMUNG21 - One step closer to a nationwide referendum

Germany has a myriad of direct demcracy tools at the local and state level, but no instruments exist at the national level. A coalition of democracy organisations want to change that. Gathering for the project ABSTIMMUNG21, they organised a trial referendum in which over 40.000 German citizens participated. Project Manager Olaf Seeling reports.

It was an audacious experiment. It was successful. In two constituencies, with 42,506 pioneers across Germany, we conducted a postal vote on eight ballot measures, with all that comes with it: voting instructions, a voting bookle and ballots sent out to all participants and counted manually. It was a living democracy festival. An this was just the trial campaign.

Democracy is more than a political system, it is a perpetual process, and sometimes even a struggle for the rules of coexistence. Democracy secures and promotes the rule of law, the common good and trust in state actions.

Federal President Steinmeier clearly outlined this in his speech in Hanau: "Democracy does not live because the constitution prescribes it. It lives and stays only if we want it and are prepared to commit to it - to defend against those who question it or even fight against it. We must actively defend democracy. When I say "We" then then I mean the state. And me. And every individual!"

The initiative ABSTIMMUNG21 is trying to make a contribution to this. Its goal: to organise the first nationwide referendum in the history of the Federal Republic of Germany in 2021. Citizens should not only be able to elect the new Bundestag, but also to vote on particularly urgent issues (e.g. climate change, free trade agreements, bee mortality, plastics, sea rescue, animal welfare, care for the elderly or housing) in time for the Bundestag elections. You will soon be able to order your voting documents for this purpose.

Democracy International involved from the start

A dress rehearsal for this nationwide, major project took place on 20.09.2020 in the form of a test vote on eight topics:

Limiting climate change to 1.5 degrees; a minimum wage of 12 €; a mandatory lobby register; unconditional basic income; donating food instead of wasting it; organic farming; a fracking ban and nationwide referendum

Voters could tick "yes", "no" or "abstention". Previously, these topics had already received the support of 2 million signatories on the petition platform Change.org.

Inspired by the Swiss model, the voting documents also included an information booklet that helps voters to inform their decision. The booklet presented the pros and cons of each issue as objectively and balanced as possible.

The minimum age for participation was 16 years. The project was divided into three "constituencies": the small rural town of Wedel in Schleswig-Holstein, the Hamburg district of Ottensen and the rest of Germany. In the two localised areas 38,000 documents were distributed to all households to make the project more representative. By contrast, participants in the rest of the country had proactively decided to participate and ordered voting documents.

Conclusion of the test vote

"We are very satisfied, with 42,000 people taking part in the project," co-initiator Daniel Schily said, "Especially given the fact that the documents landed in people's letterboxes without much notice and without a lot of media attention, I am absolutely delighted with the participation. This shows that citizens are very interested is in voting on substantive issues". Almost all of the eight topics were adopted with between 70% and 90% of Yes-votes, with the exception of the question on basic income. The detailed results can be found here. We will now evaluate the the test vote and going into the nationwide vote. One of the most important findings is probably that the number of ballot questions should be reduced to 4-5.

1,000,000 people for the first nationwide referendum

The test run has shown us that a self-organised referendum in 2021 is feasible and achievable! Our goal for next year is to get at least one million people to participate in the main referendum.

Now it's our turn

The first topic for next year's referendum has already been decided on: we want to enshrine the nationwide referendum in law. The main initiators of this ballot question are Democracy International e.V., Mehr Demokratie e.V. and Omnibus für direkte Demokratie. Perhaps other initiatives will be added. Aiming at such a high number of participants, the 2021 referendum will not be an easy feat. Each of the 4-5 topics to be voted on must also bring with them the broad support of about 200,000 - 300,000 participants in order to reach the target of one million. The starting signal has been given and now we are planning to reach and inspire as many people as possible for our nationwide referendum. Voting documents will be available as soon as possible at https://abstimmung21.de.

Results of the trial vote

Abstimmung21: Results of the of the first nation-wide vote in Germany 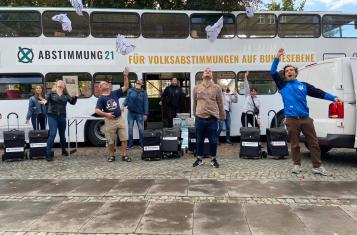 Abstimmung21, an initiative by Democracy International, Mehr Demokratie and Omnibus für Direkte Demokratie, organised a test vote in the run-up to...
read more