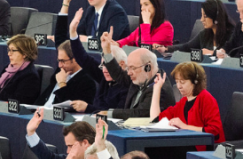 to demand to save the European Citizens' Initiative. Crucial vote on 28 September!

On 3rd September 2015, EU politicians, NGOS and practitioners came together in Brussels on the occasion of a conference to discuss how the EU can increase transparent decision-making. Democracy International’s proposals for an EU transparency law found strong resonance.

During the summer people from all across Europe had prioritised these proposals and submitted free ideas via an online survey that Democracy International had coordinated. Sven Giegold, Member of the European Parliament in charge of drafting a law proposal for more transparency, had received these suggestions. He was one of the main speakers at the conference.

During the event that took place in the European Parliament, Sven Giegold applauded the contributions made by Democracy International and its supporters and promised to take each one into account in the drafting of his report. In particular, Giegold fully agreed with people’s top demand that the trialogue procedures, by which 90% of EU law is decided in fast-track mode behind closed doors, must become fully transparent and accessible to the wider public.

People's priorities to be included in draft legislation

Giegold likewise agrees with the proposal that a mandatory lobby transparency register would need to be introduced, requiring all EU lobbyists to register and disclose accurate and up-to-date information. However, it is quite certain that the European Commission President Jean-Claude Juncker will refrain from introducing a legally mandatory version. Therefore Giegold’s report will demand at least a de facto mandatory register (even without the introduction of a law).

Overall, with the aim of influencing the draft legislation, Democracy International had circulated a survey with ten priorities for an EU transparency law and collected additional recommendations from the wider public. 1695 people participated in this political action, 662 of them submitted new proposals. Here you find the exact results.

The political proposals for the transparency report are now online: citizens are invited to mark proposals they like, change the wording, or even add further new ideas. The collection and discussion of proposals is open until 18 September and can be joined here.

Closing the conference, a pertinent remark was made. Lobbying is important for democracy: decision-makers must speak to all actors that are affected. However, it is indispensible that this exchange is fully transparent to citizens, under rules of integrity, and free of conflict of interest. If this is not ensured, the EU institutions will further lose the trust of citizens and seem all the more remote and hierarchical to them.

1695 care about clean politics in Brussels 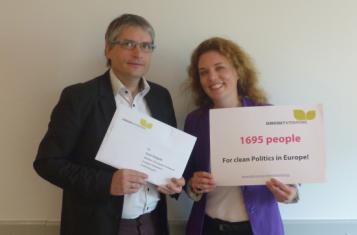 On 25 August 2015, Democracy International handed over to Sven Giegold, Member of the European Parliament, people’s suggestions for how to end...
Plus