Rotterdam, the Netherlands: europe to the people!

"For a more democratic EU - for a Europe of the Citizens"!

Rotterdam, the Netherlands: europe to the people!

On Tuesday, 14 January 2014, the first Dutch event of the campaign "Democratic Europe Now" took place. It was held in the historic establishment "De Machinist" in the old part of Rotterdam city. About 20 Dutch people - students and professionals alike - participated.

The evening started off with a short introduction by Democracy International. Lukas Stolz, Sophie von Hatzfeldt, Philipp Jacobi and Till Gentzsch layed out in depth what the campaign for a democratic EU is all about. Sophie emphazised the importance of citizens' involvement in The Netherlands and everywhere throughout Europe in order to generate political pressure and so to make the campaign a success.

In the second part of the evening a brain storm session and a lively discussion with our audience evolved. Important attributions, recommendations and constructive criticism was provided towards the format and style of the campaign. Most participants spoke out in strong favor of more direct democracy in Europe. Also, many of them shared their ideas on how direct democracy most effectively could be developed at EU level. 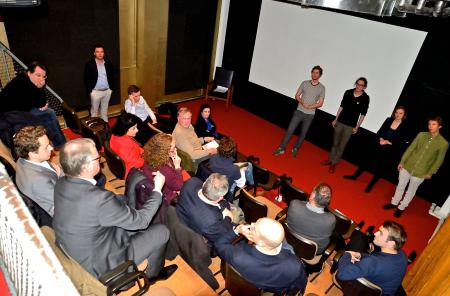 "europe to the people!" in Rotterdam

There was overall consensus that the message for more direct democracy should be communicated in a very clear and unambiguous way to attract a broad spectrum of people. Somebody added jokingly that "we need to learn from the populists" to understand what kind of messages works well. Others believed that the help of marketing professionals is essential. Anyway, effective communication is key.

After the event - a couple of individual members offered their support spontaneously. We received invitations to join other events to spread the message in The Netherlands. Someone in the educational branch offered his pro bono help in public speaking and debating. Others offered their help for future events. Looking back, this event has been a great experience and a next step towards making Europe more democratic. A follow-up event in The Netherlands will take place this spring.

Text and photos by Arris Blom.

Arris works for Democracy International's campaign "Democratic Europe now" in the Netherlands. He can be contacted at blom[at]democracy-international.org