In preparation for the September 2021 elections in Germany, we have been organising the first nationwide direct vote (referendum) in German history - we call it ABSTIMMUNG21.

Guess what? It all started with an online petition!

For a long time, making direct democracy possible by starting a referendum on “Bundesebene” (nationwide-level) had been a dream for us. While we have local and statewide referenda, there has never been a national referendum. But we have the German Constitution on our side, which says: “All power lies with the people and is executed via elections and referenda.”

In 2019, two passionate activists for democracy, Daniel and Olaf, started a petition on change.org, demanding the introduction of nationwide referenda. Now, two years later, just in time for the federal elections in September, the experiment is finally taking off.

Our vision is to get from the petition to the decision. Our goal is that people don’t just ask the decision makers for something but become decision makers themselves. Parallel to the upcoming German national elections and to strengthen people’s belief in their capacity to make a difference, we want to mobilize one million people to take part in this journey with us. Through online-petitioning on change.org and openPetition and in partnership with various other organizations, we are making democracy vivid and tangible - nationwide.

Why are we organising a nationwide referendum?

We decided: Let’s not wait any longer for politics and get cracking ourselves! And just in time for the federal elections in September 2021, at that. This is how we found the name: “ABSTIMMUNG21” (Poll21, if you will), a joint project of six civil society organizations, one of which is Democracy International.

To warm up, we organized a trial postal vote, which took place in September 2020. Based on the most popular petitions on Change.org we selected eight issues to be voted on.  From climate crisis, food waste, to increasing the minimum wage. More than 50.000 people took part in this event with over 60 volunteers who counted the results. This already felt like a little democracy festival. An overwhelming majority voted for the 1.5-degree-climate-crisis-goal and the introduction of the nationwide referendum. We had found 2 of 4 topics. Nevertheless, these two important issues have been failing to make it through the parliament. This showed how important the nationwide referendum is so that all power comes from the people, as the Constitution says. 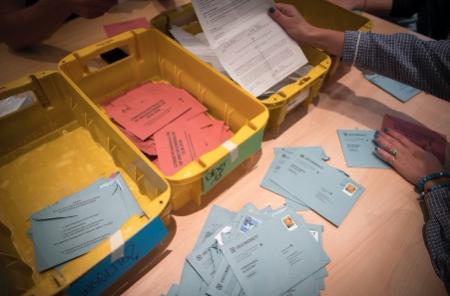 When we counted votes back in September 2020 - my job was to open the letters with the voting papers… One lesson: We need letter slicing machines for the next count!

Months of constant campaigning and lobbying for our undertaking followed the trial postal vote. So in January of this year (2021) we founded ABSTIMMUNG21 as a registered association. We’ve since mastered challenging questions like Can populists take advantage of referendums? or What about BREXIT? - and put the answers together in a well-researched FAQ (German).

From mid-February until the end of March we were running the official topic-voting. Two topics were to be picked: one on Change.org, the other on openPetition.  Whichever would receive most signatures was going to win. 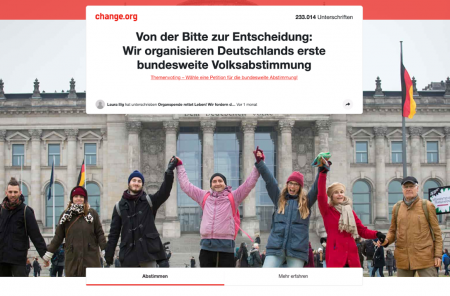 During those 6 weeks of voting, suspense was high. In the meantime, it looked as if a tricky petition from corona-sceptics was about to make it. Luckily, that did not happen. Or might it have even been a rather interesting precedent for our cause? This is what we call living democracy!

In the end, the two topics that made it could not be more timely:

What impact and what results are we seeing so far?

Our goal is to mobilize one million people. More than 170.558 people have already registered to vote. The more people take part in this democratic experiment, the more meaningful the result will be. In order to make a well-informed decision, participants receive a voting booklet containing the voting questions, important background information as well as legal basis with pro and contra arguments. We also encourage participants to share their questions with others and to discuss them in depth.

The clock is ticking. In September the Germans will elect a new parliament. And now for the first time and parallel to the federal elections all citizens will be given the opportunity to vote on these four important issues of our time:

Power rests with the people. It is the core principle of democracy. Let’s keep our fingers crossed for this democracy-rocket to fly in September.