The Global Forum on Modern Direct Democracy is the largest gathering devoted to direct democracy worldwide. It favours a multidisciplinary approach, welcoming participants from academic, political and civil society perspectives. It is attended by activists, organisations and academics from all over the world. The goal is to bring together people with different experiences and backgrounds, so as to give activists and organisations the opportunity to share their insights and connect with others working on the same issues. This October the Global Forum will be hosted by Taichung, Taiwan.

Practical Info on the Global Forum can be found here.

As democracy stagnates in many countries, and direct democracy suffers from lack of support, Taiwan has taken historic steps to move forward. The island nation in East Asia’s new Referendum law, less than two years old, is considered a global model for initiative and referendum. But how is it working in practice? What are the lessons of the first years of modern direct democracy in the new powerhouse of citizens participation? What is happening across East and South Asia and the West Pacific? The Global Forum on Modern Direct Democracy is heading to the ´beautiful island´- or ´Formosa´ as called by the Portuguese - to find out. You are invited to Taichung, Taiwan’s second most populous city, for the 2019 Global Forum, October 2-5, 2019.

At the Global Forum we will treat the following topics in a diverse line-up of panels, sessions and workshops:

Watch the livestream from the Forum here.

Ahead of the 2019 Global Forum on Modern Direct Democracy, we are organising an optional pre-forum briefing tour for interested participants of the Global Forum.This briefing tour features a train between Taipei and Kaohsiung especially arranged for our participants. The train will make several stops along the Taiwanese West coast in places key to democracy: Wanhua, Jongli, Hsinchu, Taichung, Chiayi and Tainan.

Register for the pre-tour by writing to info@2019globalforum.com. 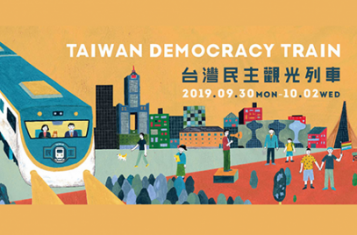 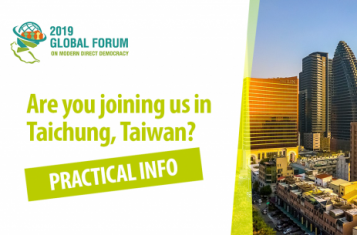