During our Danube Democracy Rally more than 90 democracy activists from all over Europe and the world came together with the aim of learning from each other, deepening knowledge on direct democracy and having fun together. Travelling nine days along the Danube, we visited Vienna, Bratislava and Budapest and had interesting and dynamic discussions around the topic of direct democracy.


Together with our partner organisation mehr demokratie! Austria we started our rally in Vienna. Daniel Schily on behalf of Democracy International and Erwin Leitner on behalf of mehr demokratie! Austria welcomed the 50 participants that had arrived at noon in the city. As a first event, we had a guided city tour through beautiful Vienna. In the evening, we discussed the topic “Models of direct democracy in European metropolises – Inspiration for Austria?” where several panelists presented the situation of direct democracy in their respective cities.

Andreas Gross, member of the Swiss national Council, spoke about the city of Zurich. Manfred Brandt, co-founder of Hamburg’s state association of Mehr Demokratie, talked about direct democracy in the hanseatic city. Erwin Mayer of mehr demokratie! Austria made the case for Vienna while Michael Efler, spokesperson of Mehr Demokratie Germany, presented Berlin.  In addition, two members of Vienna’s local council attended the discussion. It became clear that direct democracy in Vienna still has a long road ahead as the capital does not have any binding instruments of direct democracy.

On our second day in Austria’s capital, we visited the United Nations headquarters, which are mostly concerned with pre-empting the use of nuclear energy and fighting drug trafficking. After a guided tour through the UN city we listened to two presentations under the topic “the democratisation of the UN”.  Alfred de Zayas, UN independent expert on the promotion of a democratic and equitable international order, called for direct democracy on the global level with special regard to the UN system. Moreover, he emphasised his support of a world parliamentary assembly. This topic was then picked up by the second speaker Andreas Bummel, Director of the Committee for a democratic UN and Secretary General of the campaign for a UN parliamentary assembly. He pointed out that a world parliamentary assembly was needed as an increasing number of issues is dealt with at the global level.

Our last day in Vienna consisted of an action day in front of the Austrian parliament, organised by our partner organisation mehr demokratie! Austria. We held an imaginary referendum on the Transatlantic Trade and Investment Partnership (TTIP) between the EU and the USA and invited passers-by to cast their vote. The Austrian first channel ORF came along as well to film our political action. Our stay in Vienna ended with a photo call of all the democracy activists. In the afternoon we headed towards Slovakia’s capital Bratislava. 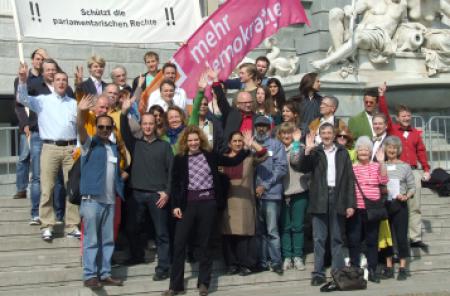 You can find all photos taken by our photographer Edda Dietrich in Vienna here.


Our first day in Bratislava started with a democracy conference, which was organised by our Slovak democracy friends of the organisation Civic Association for Direct Democracy (OzPD). The conference was hosted by the Slovakian parliament. The topic of discussion was “More citizen participation as a means for common identities? Examples from the EU and European countries”.  We were lucky to listen to high-level presentations by the long-term direct democracy activists Gerald Häfner, Bruno Kaufmann and Andreas Gross and by the academic experts Gilles Rouet (France) and Maria Stoicheva (Bulgaria). After the presentations citizens engaged in the discussion and demanded political change in Slovakia including strong instruments of direct democracy.

In the afternoon, the mayor of Bratislava was supposed to meet us in the historic town hall. However, he cancelled at very short notice. For our democracy friends of Slovakia was a sign that active citizens do not have top priority for political representatives. Nevertheless, the event in the mirror hall gave us the opportunity to exchange our personal stories and experience with direct democracy. In the evening, we met at our hotel and our Slovak partners presented their organisation Civic Association for Direct Democracy. Moreover, Democracy International’s campaign team gave an overview of their goals and actions for their campaign Democratic Europe Now, which aims at convening a new, democratic and inclusive European Convention.

The following day, Democracy International held its General Assembly to elect a new board. In addition, a “world café” was included in the session during which several groups discussed the future of direct democracy at national and global level. On our last day in Bratislava we met in the city centre to take a special group photo. We hold up signs with letters that said “Civic association of direct democracy Slovakia”. In the afternoon we said goodbye to our Slovakian friends and continued our journey to Hungary. 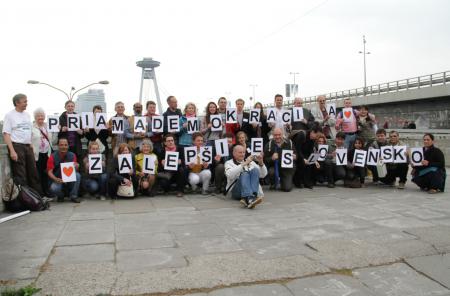 Participants of the Danube Democracy Rally in Bratislava

You can find the photos of our stay in Bratislava here.

Here you can find photos of Democracy International’s General Assembly.


The final destination of our Danube Democracy Rally was Budapest. Our stay in Hungary’s capital was jointly organised with the Hungarian political activist Csaba Madarasz. On our first day, Sebastian Frankenberger, a professional guide and member of Democracy International, showed us Budapest’s beautiful monuments and explained the city’s important historical events. He did so in a very playful way assigning to each participant a different role that had to be performed spontaneously. We had a lot of fun doing so as this city tour did not only consist of historical facts but also of singing, imaginary weddings and waltz dancing. In the evening, we listened to Dr. Zoltán Tibor Pállinger, Professor at the Andrássy University, holding a presentation on direct democracy in Hungary. The presentation was then followed by a discussion with young academics from Budapest who seemed to be rather depressed after the parliamentary elections that had taken place the preceding day and which had been largely won by Victor Orbán’s party Fidesz.

The next day consisted of a guided tour through the historic building of the Hungarian parliament. After the tour, we went to the co-working space “Múvelodési Szint” (Artistic Community Level) on the top of an old shopping mall. The location offers young people, civil society activists and artists the opportunity to work together, to socialise and to display their artworks. We used this area to hold our “open space” session during which we freely discussed a variety of topics: the philosophy of direct democracy, the EU candidate check of the Democratic Europe Now campaign, setting up strong databases for campaigns and a world of politics without politicians.

In the morning of our last day we officially closed the rally with a group photo taken in front of the Danube. We – as the Democracy International Team – are extremely happy about the nine days, three capitals and 80 participants altogether who joined our way along the Danube to engage in political discussions and personal exchange. We learned many very important things thanks to all the democracy activists who came along from so many different countries and with such diverse backgrounds. This is why we want to thank all the participants of the Danube Democracy Rally 2014 and everyone who helped to make this journey possible. 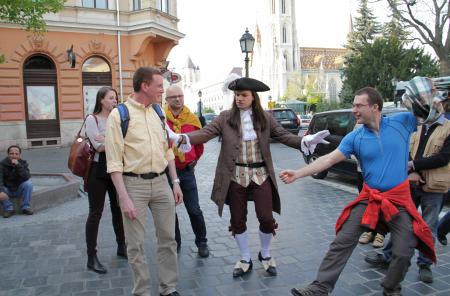 You can find photos of our trip to Budapest here: Part 1, Part 2

Here you find photos of our guided tour with Sebastian Frankenberger.