"I'll vote with my mind and heart"

"I'll vote with my mind and heart"

John D Wright is a British Oxford graduate, who teaches Latin, Classical Greek and Ancient History at the Glenalmond College in Perthshire, Scotland. His educational achievements in several countries like the United States and Italy shaped his life. The 64 year-old academic provides us with some insights about the Scottish independence referendum. This is the second of our interview serious ahead of the Scottish vote on independence.

Democracy International: Who is eligible to vote in the referendum?

John D Wright:  “All Scottish residents and EU members aged 16 and over are eligible to vote. Every else is excluded.

When is the referendum going to be held?

How is the voting planned?

The voting is planned as a general election in local polling stations and by post for eligible voters who reside outside the country.

What are the issues of the debate?

The most important issue, which bothers me a lot, is the economy. I’m asking myself what would happen to the Scottish economy if Scotland becomes independent. Can a Scotland, independent from the rest of the UK,be strong, given that most of our trade is with the EU and the rest of Britain? The Scottish government gives us weak specific ideas. The No voters are concerned about the economy because most of the Scottish markets attend to be in the EU single market and West Britain. If Scotland would separate herself of England, it will most likely hurt the economy. If we can afford independence that is something we do not know. In general, in Britain, what unites us is greater than what seperates us. We are "better together".

Who informs the population? Is the debate neutral?

These days we witness political campaigning throughout Scotland and the media, which means TV, journalism and people who work for the campaign. The debate is quite emotional and about personalities of politicians as usual in every election. Much of the language of the debate is simple but it is about ideas and not fact and figures.

How do the media act? Do they hype the issues?

The media act in a fair manner but they do sensationalize issues like economy or borders. They talk up personalities and differences.

In your view, what will be the outcome? What is your stance on the referendum?

Most likely, the outcome will be a narrow No vote of about 10 per cent. Let us stay together in the UK. I am going to vote NO. I am British and love Scotland and want the UK together. I am sure that this is the best for Scotland. I will vote with my mind and heart.

More of our Scottisch interview series...

“Ambition and talent shine through any political plan” 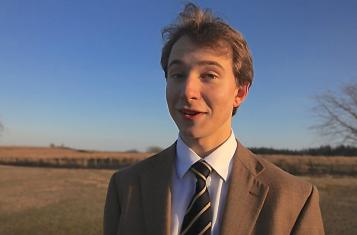 Marcus Buist, a 19-year-old man from Scotland, shares his opinion about the upcoming independence referendum with our intern Nimet Karavelioglu. The...
Plus